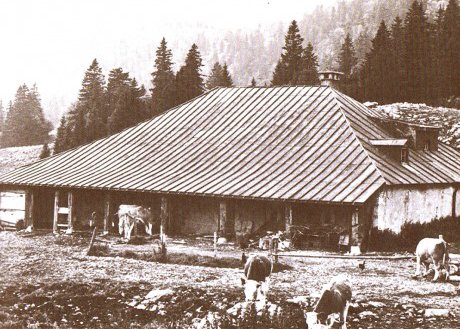 The JuraMap activity involves the open-source mapping of features based on an historical map of a region. It is being carried out to better understand the landscape of the Jura Mountains in the south-west corner of Switzerland above the village of Saint Cergue.

The aim is to create as closely as possible a map of the region as it existed in 1845, the year the Dufour Map, the first map of modern-day Switzerland, was published. Using this map as the basis, various features are added (geological, cutural, nature and wildlife based, etc) as the basis for vitual tours of the region.

The area of interest is the Jura Mountains region north of the main road from La Cure on the boundary with Switzerland through Saint-Cergue to Arzier and then cross-country to Saint-George. The road from Saint-George to the French boundary forms the north-eastern boundary.

The other main sources, aside from local ground truth and much archived material, are swissTopo's swissALTI3D Digtal Terrain Model and its swissImage high-resolution (10 cm) aerial orthophoto mosaic. Both are available online. The DTM has been manually edited (using Photoshop with Avenza's GraphicImager plugin to save edited files as geotiff files) to remove roads and tracks constructed using heavy machinery after about 1898. The current OpenStreetMap has also been edited to restore forest and grassland boundaries and man-made features to their likely locations in 1845 and to introduce significant historical and geological features that are not mapped.

To facilitate determining features and their locations, the Jura Mountains Historic Map is also available as a set of side-by-side maps and the paths and tracks that probably existed in 1845 are assumed to be based on those that were mapped by the Siegfried 1st Edition map of 1898 and thereabouts. A routing time sequence is available. It includes paths that probably also existed in 1898 but were not mapped.

Finally, we have started providing trails based on the historical context that cover specific topics such as the geology of the mountains (see trails).